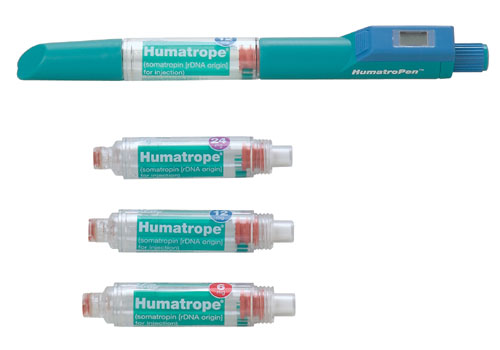 Humatrope is one of the many brands of bio-identical Human Growth Hormone (HGH) sold in the United States. Humatrope is biologically and functionally identical to the natural HGH produced by our pituitary gland. This form of HGH is created in a pharmaceutical lab via a method known as Recombinant-DNA Technology. Humatrope was the very first form of bio-identical HGH approved for treatment in America. Humatrope can be delivered via syringe or using Humatrope products such as the HumatroPen. 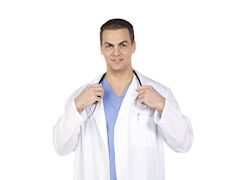 Humatrope is used primarily for the treatment of Hypopituitarism in adolescent and adult patients. Humatrope naturally restores low HGH levels, allowing patients to experience the optimal hormone balance that is associated with normal HGH production. Growth Hormone injection therapy is often combined with other forms of Hormone Replacement Therapy (HRT) when necessary, such as Testosterone, Estrogen, Levothyroxine, Hydrocortisone or Desmopressin therapy. Our goal with this website is to aid you in understanding HGH Deficiency and to help you discern whether you may be a candidate for Hormone Replacement Therapy. If the answers you seek aren't found on our website, we encourage you to talk to a physician or specialist regarding any questions that you may have.

Why Must Humatrope Be Injected? Why Can't I Take Humatrope Orally?

Many medications are unable to survive the digestive process. If you were to take Humatrope orally, the proteins that compose the hormone would be broken down, breaking the HGH molecules into their components. The only way to effectively deliver Humatrope is via subcutaneous injection. 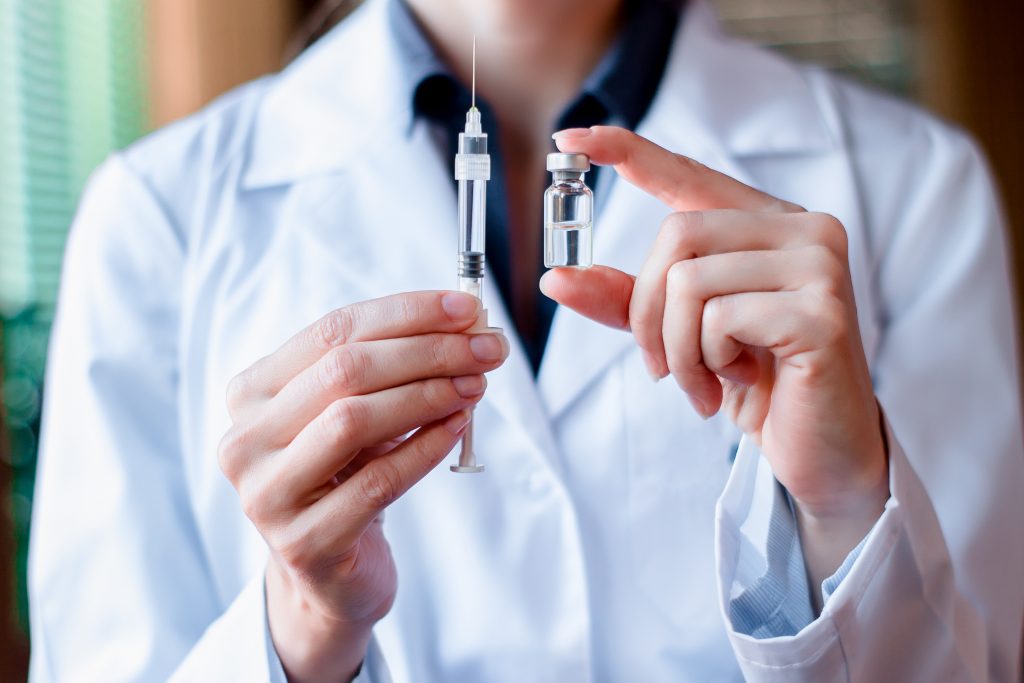 When Should I Inject Humatrope?

Our bodies naturally release maximum HGH in pulses while we sleep. To more effectively replicate the body's own natural hormone balance, most physicians recommend injecting Human Growth Hormone just before bedtime. This is not a hard rule though, and there may be circumstances where injections may be best taken in the morning or during other times of the day.

What Should I Do If I Miss My Daily Humatrope Injection?

Humatrope should be administered on a daily basis at least six times per week, but there are no significant issues if you miss a dose on rare occasions. If you forget, just wait until the next day and keep on schedule just as though you hadn't forgotten the previous dose. Forgetting frequently, however, can jeopardize the success of your treatment.

How is Humatrope Stored? 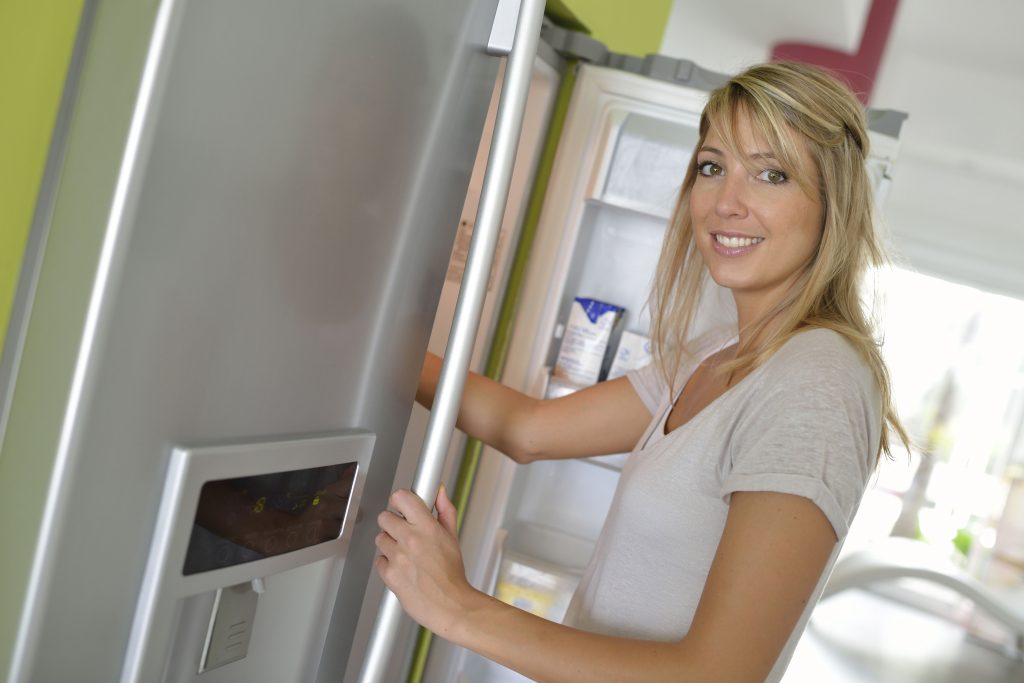 How Do I Travel with Humatrope?

If you have to go on a trip, pack your Humatrope in a thermal lunch container or cooler with cold packs. Make sure that you can keep these items on your person during the entire trip. Do not keep your Humatrope in any checked baggage during air flight trips.

How Long Does it Take for Humatrope to Work?

Every patient responds to Humatrope HGH injection therapy at their own pace. Some patients may not experience the full set of benefits for a number of months, although most patients experience some gains in the first weeks of therapy.

Why Have I Never Been Recommended to take HGH Shots Before?

Before the turn of the century, most patients that took HGH were pediatric patients, and even they were weaned off of therapy as they reached the end of puberty. Today, as research is becoming more well-rounded, it is becoming more and more apparent that HGH is vital to health throughout the lifespan. Also, HGH used to be much more limited in supply, but with changes in bio-medical technology, the resources are available to provide HGH to all needy patients. 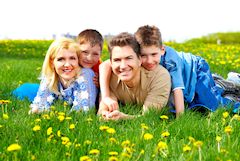 Serostim is a brand of recombinant HGH that is designated to treat HIV/AIDS-related Cachexia. It is the only HGH product that is indicated for that purpose by the United States Food and Drug Administration (FDA). The product is made by the pharmaceutical company, Serono. HIV/AIDS-related Cachexia is a common symptom of the AIDS virus, which impacts the body's ability to build and sustain muscle. Cachexia causes the muscles to atrophy significantly, which leads to structural problems, fatigue, and weakness which dramatically increases the morbidity associated with the AIDS virus.

Serostim has been clinically proven to reverse the effects of HIV/AIDS-related muscle atrophy, helping patients remain stronger and more resilient in the face of the disease. Serostim can be directly injected or can be delivered via the EasyPod or Cool.Click.2 HGH injection device.

How Does Serostim Injectable HGH Work?

Serostim works because it increases cellular metabolism, both sending more energy to the muscles and allowing them to repair themselves more quickly. AIDS patients also struggle with increased body fat as their muscle mass is depleted, and Serostim injections also can burn off the unhealthy fat that builds as a result of the metabolic disorder.

In addition to building and sustaining muscle mass, Serostim HGH also preserves the health of the organs by increasing the rate at which organ renewal occurs. The wasting related to HIV/AIDS also causes the organs to slowly atrophy as well, and injectable Serostim can help preserve the organs in the face of this negative influence.

How is Serostim Made?

Serostim is produced using recombinant-DNA technology derived from mammalian cells. Clinical research has clearly displayed that Serostim HGH injection therapy is highly beneficial in the treatment of Cachexia caused by HIV/AIDS. Clinical studies were conducted throughout three months of injection, and it was discovered that patients that took these Human Growth Hormone shots fared much better than patients that merely took a placebo. Serostim helps patients experience an enhanced quality of life in the face of HIV and AIDS. Future studies will further evaluate the total sum of benefits concerning both quality of life and physical endurance among patients.

Serostim Should only be Prescribed with other AIDS Drugs

Serostim is not intended to be a primary treatment for HIV/AIDS and should be used at the same time as anti-retroviral medications designed to treat the virus itself. Among patients that were studied, over 75% of patients began gaining weight in the two weeks after they initiated treatment. Patients that did not experience weight gain were most commonly afflicted with ongoing infections or other concurrent medical issues which prevented the therapy from taking full effect. It is advised to undergo treatment for three months. After three months of treatment, patients should reach the full extent of the benefits afforded by the treatment. If wasting becomes an issue once again, Serostim injections may be prescribed a second time.

What is Genotropin Brand HGH? 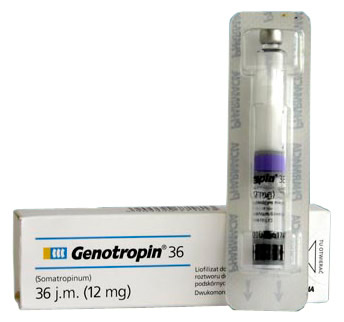 What is Nutropin Brand HGH? 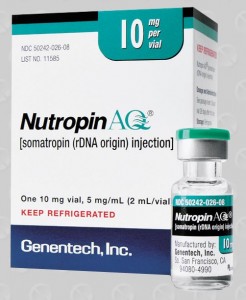 Nutropin is a brand of bio-identical Human Growth Hormone created by the pharmaceutical company Genentech. Like most forms of HGH-HRT, Nutropin is indicated for the treatment of adult and childhood-onset Growth Hormone Deficiency. There are a number of Nutropin delivery devices, including the Nutropin NuSpin and the Nutropin Pen. It is also possible to purchase Nutropin in vial form for injection with a simple syringe. 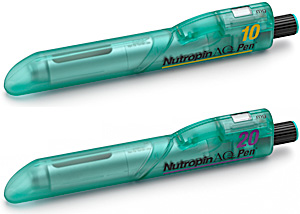 What is Saizen Brand HGH? 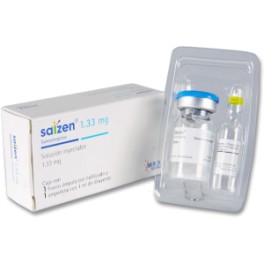 SUPPORT FOR EVERY STEP