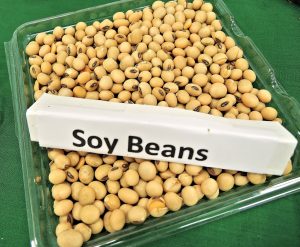 No healthy male wants to be feminized against his will. And there are memes on social media and even a few articles in the popular press that suggest that that’s exactly what will happen to men who consume a significant amount of soy in their diets. But is it true? Let’s find out.

Soy is often a go-to food for those who switch to a healthy plant-based diet, but who also want to make sure they’re getting enough protein. And, indeed, soy products are rich in high-quality proteins, and furthermore those “going through withdrawal” from an animal-based diet often like the many modern products that emulate meat patties which contain significant amounts of soy, and also the soy milk that gets high nutritional ratings while tasting good and even looking and tasting a lot like cow’s milk.

Isoflavones are the “Plant Estrogens” Found in Soy Products

But the problem isn’t in those qualities, people hear – it’s in compounds called isoflavones, a kind of “plant estrogen” which are present in abundance in soy. Chemically isoflavones behave like a weak type of human estrogen. Sounds bad for masculine qualities, right? No wonder that “soyboy” has become a word and social media meme – meaning an emasculated male.

Isoflavones, once they’re in your bloodstream, can indeed bind to estrogen receptors because of the chemical similarity. But the effect on your body is very much a mixed bag: Yes, isoflavones have mild estrogenic properties, as one would expect from their molecular structure. But they also have anti-estrogenic properties because they prevent some receptors from binding to the far more potent human estrogen. (And, yes, all males have a certain amount of estrogen in their bodies, though relatively little compared to women. Just like all women have a relatively small amount of the male hormone testosterone in their bodies.) 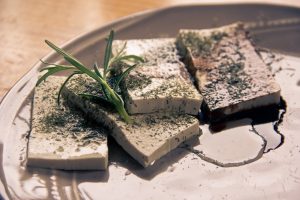 Soy’s isoflavones will likely have a very small effect on the men who consume reasonable amounts of it. That effect will vary from individual to individual, however.

Harmful Effects of Soy on Men are Sensationalized in Media

There have been some lurid headlines about animal studies showing feminizing effects of soy consumption on male mice. But what the sensationalized articles seldom mention is that mice metabolize soy very differently from humans. And we have lots of studies using human subjects, the results of which should be far more relevant.

Recently a meta-analysis of 35 separate studies of the effects of human consumption of soy came to the conclusion that soy foods do not lower testosterone or cause any other feminizing effects in men. Clinical studies showed that consuming soy-based foods had no significant effects on sperm or semen, either. Logically, this makes sense, too: Look at the history of the world. What human group is the most sexually successful? That is, what human group has produced the most offspring during the last several centuries? Obviously, it is the Asians, with the world’s highest population by far. And what human group has been known, both historically and in modern times, as consumers of high amounts of soy and lower amounts of animal products, compared to other human groups? You got it: the Asians. It appears that soy hasn’t feminized Asian males at all. Disagree? Tell it to Bruce Lee. 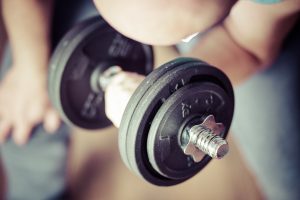 Feminizing Effects More Due to a Poor, Imbalanced Diet Overall

How much soy would you have to consume before any negative side effects would make themselves known? There have been two case reports that should put our worries to rest. One described a 60-year-old man who consumed three quarts of soy milk every day. That’s twelve servings. Another featured a 19-year-old vegan man who consumed between 12 and 20 servings of soy-based food every day. Compared to most people, even those who have soy-heavy diets like the average, say, Japanese – these two individuals were getting around nine times more isoflavones. They did observe some feminizing effects, but the doctors citing the reports emphasized that anyone consuming that much soy is by definition eating a very imbalanced and poor diet. All the human studies conducted so far show that even relatively heavy soy intake causes zero feminizing effects on males – and also stress the fact that four servings a day should be your limit anyway, since more than that doesn’t leave enough room for other healthy foods like fruits, vegetables, starches and other complex carbohydrates, or foods rich in fiber or trace nutrients. Soy is great, but you need those too! Protein isn’t everything. 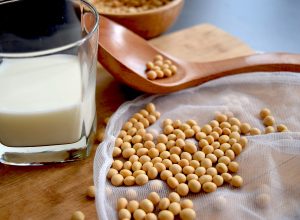 The vast majority of people, even those who absolutely love soy burgers and soy milk, are not going to consistently consume three quarters of a gallon of soy milk every day, nor are they going to eat 15 or 20 soy burgers every day, for months on end. That’s extreme and ridiculous. So the lurid headlines needn’t worry you, if you have any kind of moderation at all in your dietary choices. You can relax and enjoy the excellent benefits of soy protein to build your strength and muscles and health, and be as masculine as ever.

That’s not to say that some men don’t have symptoms of low testosterone, weakness, sexual dysfunction. or feminizing effects like gynecomastia (breast size increase in men). They do. But the cause is very unlikely to be soy consumption. If you are suffering from these symptoms, it’s far wiser to have the tests done at one of our clinics to determine if the real cause is a hormone deficiency or some other cause, instead of engaging in guesswork based on clickbait links or sensationalistic articles in the popular press.